Don't you just love reading the Sunday paper? Waking up, heading over to your doorstep, pulling out the comic section. Ah, gotta love it.

At least, I'm sure that kids all those years ago did. Welcome to the new age, baby!

The world we're in today is all about modernizing everything. I mean think about it, you're reading this news on a computer right now. (I haven't forgotten about you, mobile users! A mobile site will be coming soon so that sign will get out of your way.)

Anyway, just because we are all about modernizing things doesn't mean that we have to forget about papers. Take The TTC Times: Rewritten, for example, who just recently started publishing again after a year-long hiatus. They're eager to get back in business, and they're going to need your help to do it.

As always, before talking about the above paragraphs, I'm going to leave you hanging and start talking about today's contest. We've got another feedback question for you today, this one also relating to news. "How can we improve our news, both in-game and out of game? What kind of sections do you want to see in the in-game news?" As always, head on over to our Alpha Giveaway Page to enter. It doesn't hurt to try!

Finally, let's get back to the news. The TTC Times: Rewritten need some help with their setup this week, and they want you to help them. Either type up an article or make a comic in the next 24 hours, then submit it to the MMO Central Forums thread. If you win, they'll send one of those sweet, sweet Alpha Keys your way. You can learn more about that over here.

Now, let's take a look at those winners!


Today's Question:
"What is the worst thing that Toontown Rewritten has done so far, and how should we have done it?"

I don't think Toontown Rewritten has done anything bad so far. Just keep doing what the original Toontown did.

Not putting in cogs Alpha yet :(. Everyone likes to fight cogs...

Honestly, I feel like those who contributed money towards Toonbook should have gotten alpha keys. I don't mean that you should have said, okay, donate to toonbook and we'll give you a key. I just mean give one to recent or long term donators...

Toontown Rewritten, while recreating Toontown, has neglected Toonbook... Besides that, the only thing I think that the actual game has done wrong is the amount of people being let into the servers. I think that around 600-700 would be better...

The worst thing you guys have done is reimplement the way Speedchat Plus works...

Nothing! I think you are doing a great job at this!

Showing gameplay too early. When I saw it I wanted to play Toontown Rewritten more...

Toontown rewritten has kept people waiting for a long time to play, what some people would call, a childhood game.you could have allowed more alpha testers to toontown to get the job finished faster

nothing you have only made the world a better place!

Honestly, I believe you guys have done everything wonderfully and that no one could have done a better job than you guys. :)

The folks over at Toonter hosted a contest to find the best meme-makers in the community. Their staff got together and picked out these winners below to win an alpha key. 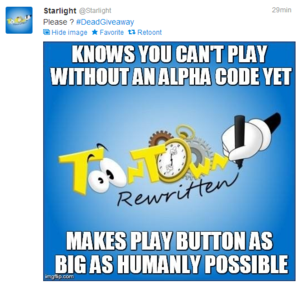 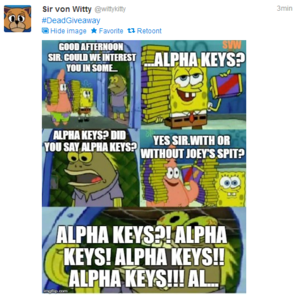 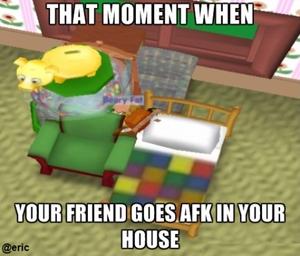 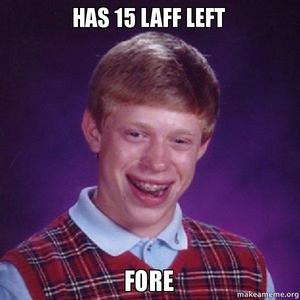 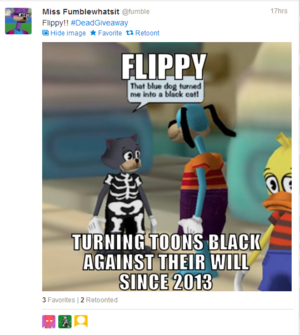 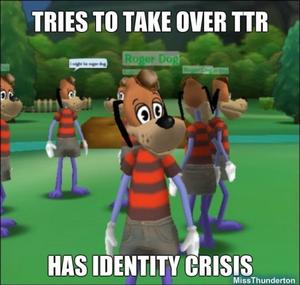 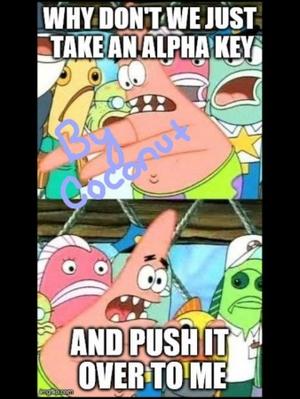 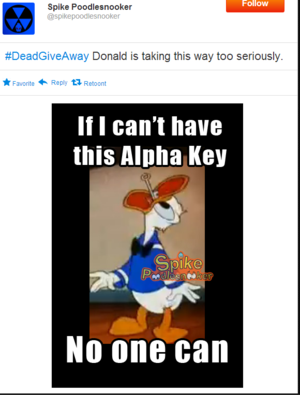 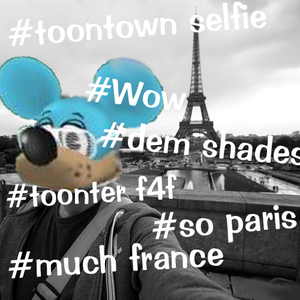 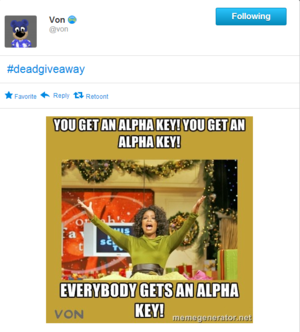 captin fire ball said on December 8, 2013 at 2:11 PM
I think the worst thing is the playgrouned. Why do I think this? Well because some peaple are starting to get boared with the every day playgrouned. Why not add a hot tubb or disco or trampolean and a fun job. I do hope you take this as an idea.So i hope some toons agree with me i mean why not? why? What do you think?
Captain Fireball said on December 8, 2013 at 2:24 PM
I wouldn't mind a weekly newspaper delivered to the door's of toons every week to read. Just like the catalogue is delivered a weekly in-game newspaper could be just as beneficial with coupons for stuff out the catalogue like 20% off this and 10% off that. It could be a big success.
spellboy555 said on December 8, 2013 at 2:31 PM
The toontown News was always great to read. It's always nice to know whose been active and to see if you made it into the paper as well.
Mystique said on December 8, 2013 at 2:35 PM
Are we going to get a Sunday paper from The TTC Times: Rewritten every Sunday while in toontown? That would be pretty cool and much different than what Disney was doing with all the news in the book.
Biscuit said on December 8, 2013 at 7:00 PM
Everyday i look at the results and when i don't see my name i feel like crying. Toontown was my favorite game, its was the best thing in the world. I really wish i was like everybody who has one i can never think of a good response, no matter how much i mean it, it is still no good. You guys are doing a VERY VERY good thing of remaking Toontown.
Sheriff Spike said on December 8, 2013 at 7:30 PM
Sir Max, I think what you are doing at the moment is AMAZING! Who said you need to change it? I think it is awesome and i hope to see this In-Game and Out-Game. Sir Max, Your doing great! Please keep this type of News/Mail. BUT one thing you could do is : Send a eMail to everyone who has a account on ToonBook, this link, Or this section of the page. #ILoveTheGuysThatAreMakingToontownRewritten
Popcorn Cheesyteeth said on December 9, 2013 at 9:37 AM
One thing that would be nice with the in game news would be free codes on occasion. Doesn't have to be huge, but maybe some jellybeans here and there... a fun shirt or accessory for the season. For out of game news, I think it seems to be working well already.
MINI said on December 10, 2013 at 3:27 AM
I don't think Toontown Rewritten has done anything bad so far. Just keep doing what the original Toontown did .. THANK YOU
Back To Top