Ah, Hello, my dear friends! I bet you're wondering why I'm here on such an odd week. I'm Professor Flake of the Loony Labs, as well as the founder of my Precipitation Foundation. We don't have a building yet, and by we it's actually just me - but it's in the works.

Ever since the big snow of last Christmas, I've been focused on calculating the fluctuations in the ambient temperatures of Toontown in hopes of discovering how to harness such an ability. My main base of operations has been, of course, The Brrrgh. Development of it has frozen, however, quite literally. The temperature sensor technology just isn't perfected quite yet.

This week has the labs buzzing with a new focus, however. The animating atrocities in Toontown Central have everyone excited -- despite advances in my temperate temperature tests. No matter, however, as the Labs are giving us the day off on Saturday for the election. Everyone except for the new S.I.L.L.I. (Scientists Interested in Laugh Levels Increasing) Team, that is.

In preparation for the increased laughter levels on Saturday, we've released a new update to our Toon T.A.G.S. (Totally Awesome Graphic Simulator) to improve performance and ease of use. We encourage them to be tested in large groups of toons, as the performance should be significantly increased.

Now, I must be getting back to my work. If you're ever looking for a few tasks, I'm in need of a Junior Research Scientist for hire. You know where to find me!


Throughout the next few weeks, we will have a few updates focusing on improving gameplay on lower-end computers. You should notice a big difference today!

Alpha Testers: We'd appreciate it if you can try to organize large groups of toons to test out client performance. Let us know how things go!

Bugfixes:
• Fix an issue where toons could bypass the election rope. 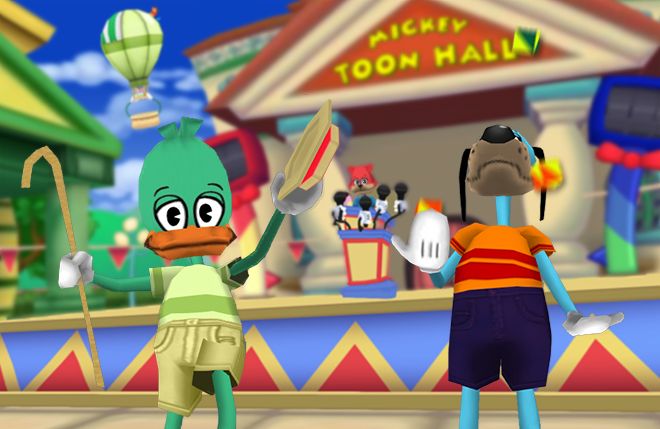 Rhymes for a Reason