Well toons, we've got some bad (Or good, in our case.) news to tell. As you've probably guessed from the lack of posts, Sir Max is gone. Vanished. POOF. It's as if he disappeared off of the face of the earth! But hey, that's just silly... Right?

We know Sir Max has to be around here somewhere, though, because these wacky effects haven't worn off! My torso is completely invisible right now, and a few minutes ago I was as tall as Goshi. This isn't even mentioning that I sound like a duck. A DUCK. I don't know if you've noticed, but cats aren't supposed to quack.

Now I know that Sir Max loves his April Fools jokes, but I've simply never seen anything like this. Silly as it is, we need to track him down and get that remote before it gets even worse. I'm not sure if the town can take this much silliness. I swear to you, even the hydrants seem to be shaking in fear.

This isn't just a Sir Max hunt that we're on either, though. That elephant is still missing and tumbling through the town. Gah! I can't take any more of this. And if McQuack drops that piano on me one more time, I'm going to lose it. It's supposed to be an April Fools Day, not an April Fools Week! Wait a second - am I -- Oh, for the love of Walt. He just cut off the gravity. It was bad enough trying to do housework with no gravity, but now it's cut off everywhere. Brilliant. Just brilliant.

Lucky for us, I think this chase is soon to come to and end. Sir Max may have jumped off into the air somewhere, but his birthday is tomorrow. Why does that matter? Come on, we all know Max. He's too much of an egomaniac to pass up on a slice of cake and attention pointed towards him. We'll stop this excessive silliness soon enough -- I hope!

Maintenance:
• Holiday code cleanup, to allow us to better create and manage events in the future
• Fix up a few backend functions

Features:
• A geyser has sprung up in Acorn Acres! Head over there and hop on -- but careful, it's hot.
• Sir Max pushed another one of his buttons and lowered the gravity everywhere. This is just a small step to his silliness, so one can only imagine what's coming up next.
• Finished trolleybot recall 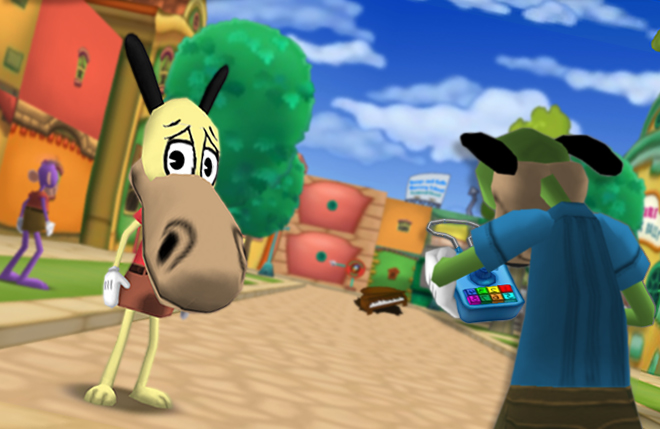